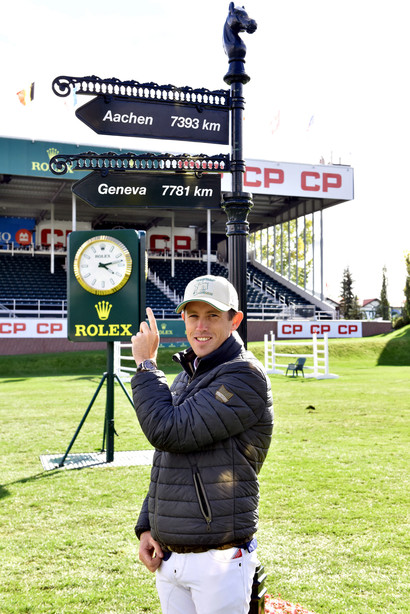 The picture enclosed shows Scott Brash, winner of the "CP 'International', presented by Rolex". It can be used free of charge (picture: Rolex Grand Slam of Show Jumping/Kit Houghton).

Congratulations on your victory in the “CP ‘International’, presented by Rolex”. Exactly one year after your sensational Grand Slam triumph, history is repeating itself again for you. Albeit with a different horse …

Scott Brash: Yes, I won all three Majors that led to my Grand Slam victory with “Hello Sanctos”. But here I opted for “Ursula”. I am so delighted at this victory with her, because it was such a long road to get her there. She was always an incredible horses and winning a Major with her is something very special for me.

So, you will now be taking on the Rolex Grand Slam challenge with “Ursula”? After all, the two of you already also came second in the “Rolex Grand Prix” of Aachen.

Brash: “Ursula” is a world-class horse and I am extremely happy that she is finally getting the attention she deserves. But I am also realistic: The Rolex Grand Slam of Show Jumping is such a difficult thing to win – after all we are talking about the three biggest Grand Prix in the world. Being able to win in Geneva, Aachen or Spruce Meadows even once in a lifetime is already a fantastic achievement in itself. And it remains to be a virtually impossible challenge to win all three Majors in succession, even with the best horse in the world. Even today, I can still hardly believe my victory last year. But don’t understand me wrong: I will now nevertheless dedicate my entire attentions to the Rolex Grand Slam again and give it my best shot.

So that means now: Focusing totally on Geneva?

Brash: Absolutely! Regardless of the Rolex Grand Slam, in my eyes the CHI Geneva is the best indoor show in the world. I love Geneva! The “Palexpo” is a wonderful arena, there is going to be fantastic sport there and the “Rolex Grand Prix” will be a tough competition again. I know what is awaiting me – and I am looking forward to it!

Do you actually have enough space for a further Grand Slam Trophy at home?

Brash: There will always be room for that, don’t worry! (laughs)