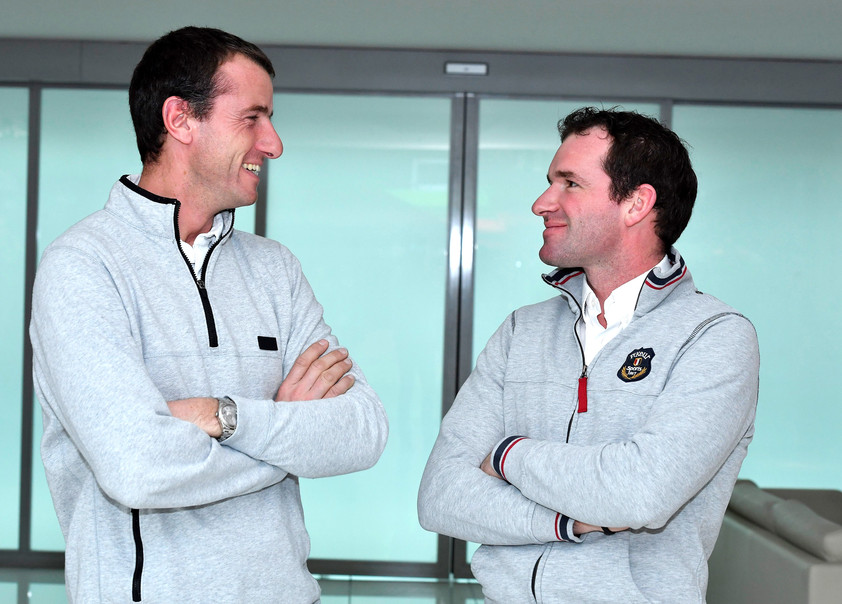 At the CHI Geneva 2017 Philipp Weishaupt and Grégory Wathelet have the chance of claiming their second Major victory this year. An interview with the two Grand Slam candidates about fighting spirit, headstrong partners and prestigious Grands Prix that every rider wants to win once in a lifetime.

The competitions at the CHI Geneva began yesterday. What was the atmosphere like here at the Palexpo?

Grégory Wathelet: Simply super! The atmosphere here is fantastic, the crowd is incredible. It is simply a really good show.
Philipp Weishaupt: Absolutely fantastic. We are really enjoying coming here every year, because we simply know what awaits us.

Yesterday the first qualifier for the Rolex Grand Prix already took place. How did it go for you?

Wathelet: It went really well for me. I wanted to qualify for the Grand Prix as soon as possible and coming fourth yesterday meant that I succeeded in doing so. As such, a bit of the pressure is off and now I can concentrate on the Grand Prix on Sunday.
Weishaupt: I rode a young horse in the qualifier yesterday, the eight-year-old mare, Call me Eva, and I was a bit unlucky. The first half of the course went well then I risked too much in the turn to the upright and had a refusal. That was my mistake. But I am optimistic that I will be able to qualify for the Rolex Grand Prix this evening, when I ride my top horse, Asathir.

Does one have a different attitude when competing at such a show as the current Grand Slam contender? Is there more pressure?

Wathelet: Of course. Philipp can win more money here in Geneva than me, so he is under more pressure. (both laugh) No, seriously: Of course, we think about the Grand Slam, but at the end of the day it is the important Grand Prix that we want to win, whether we get a bonus for it or not.
Weishaupt: That’s exactly how I see it too. The prize money always plays a role, but primarily as a top rider you want to win the Grand Prix of Geneva once in your life. The bonus would be super, but all 40 riders will give it their best shot to win. I will do the same, but without thinking about the bonus. If I succeed, then so be it. And if not, life carries on and I will try again next year.

Which horses do you plan to ride in the Rolex Grand Prix on Sunday?

Wathelet: I will ride Corée, whom I won in Aachen with in July. I have been taking things a bit easier with her over the past weeks so that she is top fit here in Geneva. I will ride her in the Credit Suisse Grand Prix this evening, then she will have a day’s rest and on Sunday we will take on the challenge in the Grand Prix.
Weishaupt: If I qualify for Sunday, I will ride Asathir. She has performed very well over the last few weeks and she loves such big indoor halls like the one here in Geneva. Yesterday I jumped her in a small class and she felt great. I will also be competing with her this evening in the Credit Suisse Grand Prix, and we will hopefully secure our ticket for the Rolex Grand Prix.

If you compare your two top horses with each other, are they similar?

Wathelet: To be honest, I don’t know Philipp’s horse that well, so I can only speak for my mare. She is simply incredible, but incredibly complicated too. So, a real woman! (laughs) But I know she can jump all courses and win everything, if she only lets me ride well enough.
Weishaupt: I don’t think the two of them have much in common, rather the opposite. Perhaps one could say that both have a very strong character. They like to go their own way. But I am in the fortunate position that my mare is very easy to ride. Grégory has to work a bit harder there.

How about the two of you? Are you similar types of riders?

Weishaupt: It would be great to ride as well as Grégory one day. He can simply steer a horse two seconds faster round a course than anyone else and this is a gift that only very few riders have in the world. It is amazing when you look at the number of different horses he has ridden to victory with.  I hope I will be able to keep pace with him one day.
Wathelet: I think we are actually quite similar. Every rider at this level has to dispose of certain attributes: He has to be well-organised. He has to take what he does really seriously. But, above all, he has to be ambitious, very ambitious! A real fighter. If you don’t seriously want to win at this level, then you will never have a chance of winning. I think Philipp and I have this fighting spirit and that is why we have already been able to win important Grand Prix’s now and again.

How difficult is it going to be for you on Sunday to win the Rolex Grand Prix and thus a further Grand Slam Major? about the two of you? Are you similar types of riders?

Weishaupt: I don’t think anyone will succeed in doing what Scott Brash did two years ago with his Grand Slam victory, any time soon. There are perhaps five active riders who succeeded in winning three Majors in their career and in some cases 20 years lay between the victories. Winning more than one Major within one season is a huge challenge. But I have a really good horse and will do my very best.
Wathelet: When the Rolex Grand Slam was brought to life and we riders heard about the mode for the first time, we thought it would be impossible to achieve this. Then came Scott and succeeded in pulling this feat off straightaway. So we learned that it is indeed possible. But as Philipp already just said, it is very, very difficult. Every rider dreams of winning these Grands Prix at least once in their careers. We can see that this weekend: All of the big names are here with their top horses. Of course, we all hope and dream of winning the Grand Slam Majors and ideally within one year. But even if several years lie between, it still remains a fantastic achievement. Just like coming fourth or fifth in the Rolex Grand Prix on Sunday. That would also be a wonderful result considering the line-up of riders.
Weishaupt: It is definitely going to be a tough competition in any case and whatever the end result is going to be, I am sure we are going to see excellent sport.