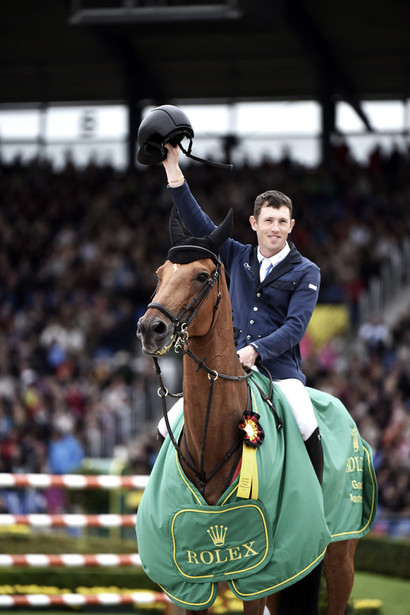 On the way to becoming a legend: The Scottish rider, Scott Brash, is the first show-jumper in history to win two Major shows in succession. After his victory at the CHI Geneva in December, he also won the Rolex Grand Prix of Aachen on Sunday. Now, at the coming Major show, the Spruce Meadows “Masters” (Calgary, Canada, from 9 to 13 September, 2015) he has the chance to go down in history – as the first Rolex Grand Slam winner of all time. We talked to the overjoyed, exceptionally talented rider.

Scott Brash, congratulations on this fantastic victory! Two days ago you said that you definitely wanted to achieve the second victory in the Rolex Grand Slam. You have now attained this goal. How does that feel?

Brash: Incredible, simply incredible. It really was my dream to win in Aachen. I think winning here in this impressive stadium, in this most beautiful arena is the best place to win in the whole world. The Rolex Grand Prix is extremely demanding. The obstacles were very high, the course demanding – and also technical. But that was to be expected, because the best riders and horses in the world compete in Aachen. And when seven riders reach the jump-off as well, that is of course fantastic for the spectators. Winning here is simply incredible.

You were the last to compete in the jump-off. Did that increase the pressure?

Brash: No, to be honest, I like riding last. When you enter the ring as the last rider, you know exactly what you have to do. That was true for the jump-off too: I knew, where I had to be careful and that made it easier for me. Daniel Deußer had already produced an excellent round. It was obvious that the last obstacle would decide who would carry off the victory. So, I had to simply do my best to stay clear in a very good time that would ultimately suffice for the victory. Luckily, it did suffice…

Last year you claimed that Hello Sanctos is not very happy in Aachen. You only came 29th in the Rolex Grand Prix. Has he changed his mind now?

Brash: Yes, definitely (laughing). Last year – for whatever reason – we didn’t do very well in Aachen at all. That is why I directly took part in the training session on the first day with Hello Sanctos this year, in order to get him used to the atmosphere. Yes, it is strange. He already felt better during the training than he did last year, on Saturday he was even a little bit better again, although still not ideal. And then on Sunday, he really surprised me in the Rolex Grand Prix. He jummped fantastically.

Will you ride Hello Sanctos at the FEI European Championships in Aachen or will you rather rest him for the third Major show, the Spruce Meadows “Masters”?

Brash: The Europeans will be very important for the British Team and they are counting on me, and the Rolex Grand Slam is definitely part of my main focus of the season.

Looking ahead to the future: Do you think you might be able to win the “Masters” and thus ultimately make history?

Brash: It is already very difficult to win one of the Major competitions, two in succession is incredible and three in a row is almost impossible. It is going to be really difficult, but of course I will give it my very best shot and will try to win.