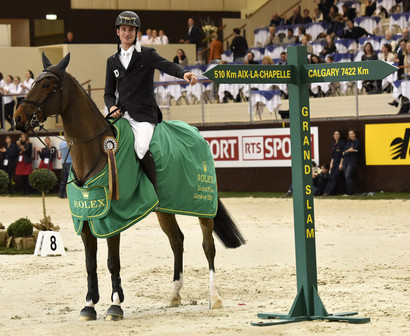 “Winning a Major is an incredible feat!”

What are your objectives for the CHIO Aachen?

Steve Guerdat: Aachen is always an absolute highlight, every year. The stadium, the huge crowds and the interest of the media is unique. That in itself is fantastic motivation alone. Every rider wants to win here one day. But, of course, after winning in Geneva, a victory in Aachen this year is particularly important to me.

For then you will have taken a further step in the direction of the Rolex Grand Slam ...

Guerdat: Yes, and yet I still find it difficult to set myself the Grand Slam as a concrete goal, before actually having achieved the second step. It is a dream for me, but at present it is still too far out of reach. Winning one Major alone is already an incredible feat! I have succeeded in achieving that in Geneva three times, I have already come second in Calgary once and fifth in Aachen. I am very proud of these results. The Grand Slam is simply something unbelievable, only a few riders will ever achieve that.

How important is this initiative for your sport?

Guerdat: Aachen, Geneva and Calgary were always the main shows of the season for us riders. This is where you find the best sport and the most visitors. The Rolex Grand Slam has placed everything on a new level again. It is a unique format, which also promises even more excitement for the spectators, because they can route for the riders on their way to the next Major victory. This was clearly noticeable in Calgary last year. The whole crowd was behind Scott and it was a very special moment for everyone when he won the Grand Slam. It also attracted huge media interest. I think one can say that the whole sport profits from the Rolex Grand Slam.