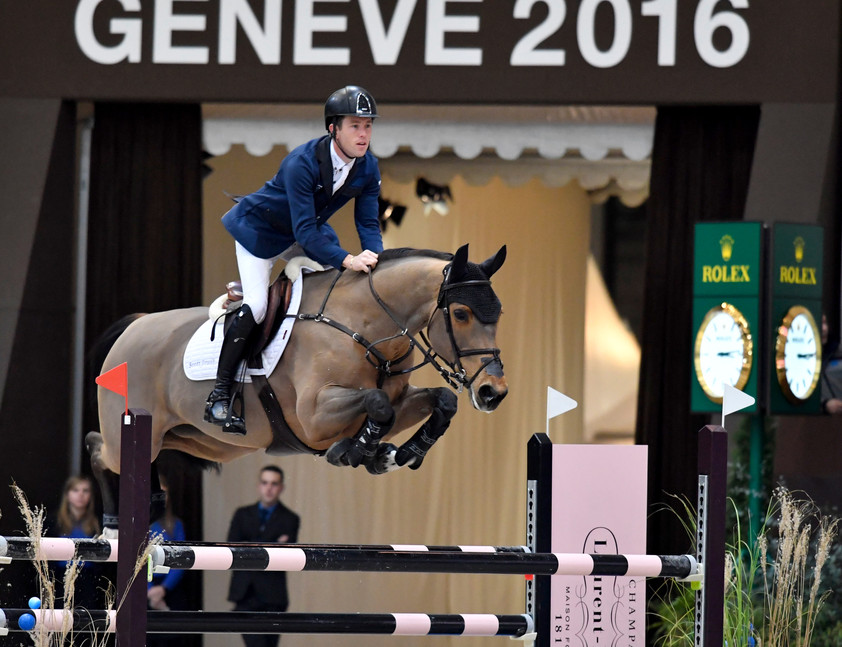 The first big competitions of the CHI Geneva are over and from the onset the current Grand Slam contender, Scott Brash, proved that he is in top form. He took the very first opportunity to secure a starting place in the “Rolex Grand Prix” on Sunday.

The British rider and his current top horse, “Ursula XII” already put in a magnificent round and galloped over the finish line clear in the qualifying competition on Thursday. “I am delighted at our performance, ‘Ursula’ is in the best form possible. She was still a little bit overwhelmed by the atmosphere here at the Palexpo, but she jumped very nice and relaxed. She has got the day off today, she will compete in a small class tomorrow just to take the edge of her before the Grand Prix on Sunday.”

Scott Brash also succeeded in securing himself the ticket for the final with no pressure at all: The 31-year-old mastered the “Credit Suisse Grand Prix” – the first qualifier for the “Rolex Grand Prix” on Sunday – with ease after finishing third with “Hello M’Lady”. The US American, Kent Farrington, jumped to victory in the class with “Creedence”, ahead of Jérome Guery and “Grand Cru van de Rozenberg” from Belgium. In addition to the successful trio, a further 20 riders were able to reserve a ticket for the “Rolex Grand Prix” with top placements, including the number one in the world rankings, Christian Ahlmann, in addition to his German team colleagues Meredith Michaels-Beerbaum, Daniel Deußer and Marcus Ehning as well as the Italian show-jumper Lorenzo de Luca and the French riders Pénélope Leprévost and Roger-Yves Bost.

On Sunday, they will be taking on among others the reigning double-World and European Champion Jeroen Dubbeldam from the Netherlands, the US American McLain Ward, winner of the Pan-American Games 2015, the Vice European Champion Gregory Wathelet from Belgium and the bronze medallist at the Olympic Games in Rio, Eric Lamaze from Canada. All of these riders have already pre-qualified for the Major final due to their outstanding performances at the most recent Championships, alongside the Swiss national hero, Steve Guerdat, as winner of the Major in Geneva in 2015.

However, it is still not certain whether the winner of the CHIO Aachen 2016, Philipp Weishaupt from Germany, will be able to compete in the “Rolex Grand Prix”. He wasn’t placed in the “Credit Suisse Grand Prix”, nevertheless on Saturday he still has two chances of qualifying for the Major final: In the “Coupe de Genève” at 12.30 p.m. and in the “Geneva Classic” at 9.30 p.m.