The Rolex Grand Slam has begun for Nick Skelton 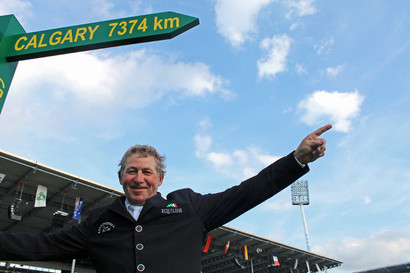 Nick Skelton from Great Britain is the first rider in the history of the equestrian sport to take on the challenge of the Rolex Grand Slam.  After winning the Rolex Grand Prix at the World Equestrian Festival, CHIO Aachen 2013, he now has the opportunity to write equestrian sport history.  A victory in the CSIO 5* Spruce Meadows Masters (September 5th-9th) would open the door for him to the Rolex Grand Slam.  Because the rider, who manages to win the CHIO Aachen, the CSIO Spruce Meadows `Masters´ and the CHI Geneva in succession, wins the Rolex Grand Slam – and with it also an additional one million Euros in prize-money. “The Rolex Grand Slam is a fantastic initiative.  Now, things are going to get really exciting for me,” Skelton stated after his victory in Aachen.  Writing history seems to be in Skelton’s blood – he is the the scond rider (together with Piero d´Inzeo) to win the Grand Prix in Aachen four times.  As such, he has already long since become an equestrian sport legend and it even seems quite feasible that he could achieve the ultimate goal: “Of course, it is not going to be easy to win the Rolex Grand Slam, namely heading the field in the three first-class shows in Aachen, Calgary and Geneva in a row.  But who knows – perhaps I can simply carry on where I have left on in Aachen.”