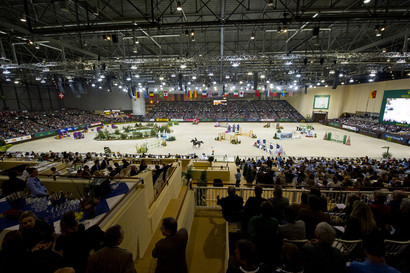 The "Rolex Grand Slam of Show Jumping" is returning to the foot of the Alps. As traditionally scheduled during the pre-Christmas period, the CHI Geneva is the third and last Major Show of the year. The most famous show-jumpers in the world meet up here at Palexpo, the legendary arena of huge dimensions, to see who will be crowned as the best of the best.

It was one of those magic moments that only happens in the world of sport, when the Swiss Olympic gold medallist Steve Guerdat won the "Rolex Grand Prix". He withstood the immense pressure here, in this tremendous arena in front of this unique, euphoric audience, his audience, and rode to victory with "Nino de Buissonnets". Wildly acclaimed by 8,500 fans in the sold-out arena.

The mission "Defending the Title" is going to be more difficult than ever this year, since the world elite is travelling to the famous Geneva Lake in an attempt to replace Guerdat as the titleholder. The World Champions from the Netherlands, both the Individual Champion Jeroen Dubbeldam and his equally successful team members, comprising of Jur Vrieling, Maikel van der Vleuten and Gerco Schröder, will be competing in Geneva. The "Oranjes" won the World Championships ahead of the team from France that comprised of the Vice World Champions Patrice Delaveau, Pénélope Leprevost, Kevin Staut, Simon Delestre and their reserve rider, Jérôme Hurel. The extremely strong French delegation will also be supported by the European Champion, Roger Yves Bost. Currently number one in the world rankings, Scott Brash from Great Britain, has also confirmed his participation, as well as the World Cup winner and "Rolex IJRC Top 10 Final" Champion, Daniel Deußer from Germany.

Steve Guerdat's victory last year marked the start of his personal "Rolex Grand Slam of Show Jumping". However, he made mistakes at the following CHIO Aachen and Spruce Meadows "Masters" Major Shows, which meant the dream of becoming the first rider to win the "Rolex Grand Slam of Show Jumping" was over. The same applies for Christian Ahlmann - he namely picked up four faults in the first round of the "CP International presented by Rolex" in Spruce Meadows. Nevertheless, when he travels to Geneva, Ahlmann still has the chance to pick up a bonus of a quarter of a million Euros – in addition to the prize money. Canada's Ian Millar won't be able to pursue his personal Rolex Grand Slam. After winning the "CP International presented by Rolex" in Spruce Meadows, Canada, his horse "Dixon" is currently in training to qualify for the Canadian Olympics – and Millar hasn't got another top horse at his stables, so he is reluctantly not going to be able to compete in Geneva.

Incidentally, the chances of a Swiss victory at the Palexpo are very good: Each of the last three Major Shows was won by a local hero - Steve Guerdat (CH) in Geneva, Christian Ahlmann (GER) in Aachen and Ian Millar (CAN) at Spruce Meadows. Whoever writes the next chapter in the traditional history of the CHI Geneva, which has been staged since 1926, whoever wins the "Rolex Grand Prix" at the CHI 2014 – will also go down in history as the next rider, who has the opportunity to win the "Rolex Grand Slam of Show Jumping", this ultimate equestrian sport challenge.