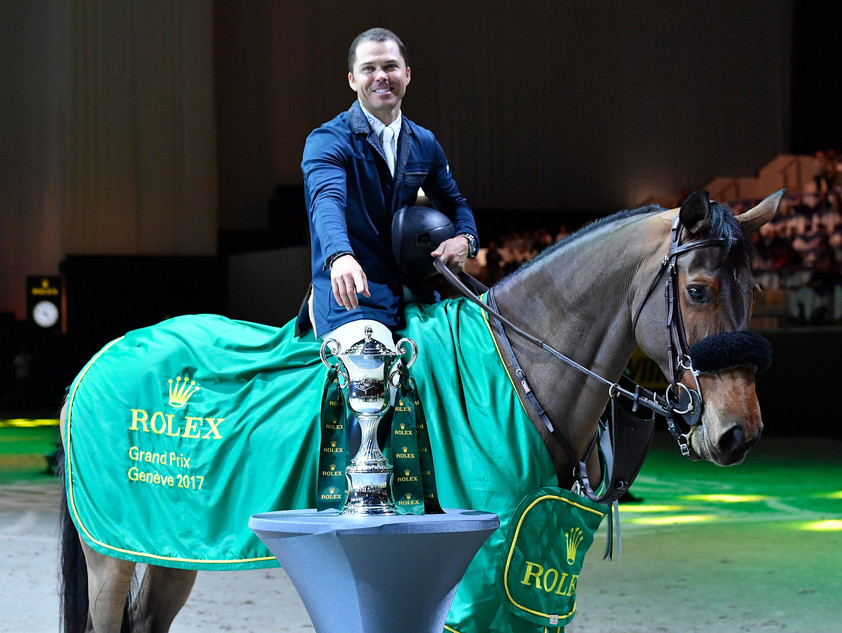 Kent Farrington won the Rolex Grand Prix at the CHI Geneva 2017. In the last leg of the year of the Rolex Grand Slam of Show Jumping, the US American jumped to victory on Sunday afternoon at the sold-out Palexpo and thus celebrated the first Major victory in his career.

“This is the one I’ve been aiming to win for years. I came close a couple of times and I am so happy at having won here in Geneva today. My horse jumped incredibly, the crowd was amazing, really supportive. A great way to finish the year for me,” commented Kent Farrington, who had saddled the eleven-year-old mare, Gazelle, for the Rolex Grand Prix.

The 36-year-old can now take on the ultimate challenge in equestrian sport, the Rolex Grand Slam of Show Jumping: The rider, who wins three Majors in succession, goes down in history as a Grand Slam Champion and picks up a bonus of one million Euros. “That’s a tall order and I am going to try best,” promised Kent Farrington with a view to the coming Grand Slam legs. The journey continues for him in March at The Dutch Masters in the Netherlands, when he will strive to claim his second Major victory in a row. If he triumphs there as well, he would be riding to take the Grand Slam title in July at the CHIO Aachen 2018 in Germany.

Philipp Weishaupt competed in Geneva as the current Grand Slam contender. Riding Asathir, the German show-jumper unfortunately did not reach the jump-off of the Rolex Grand Prix.

The Dutch Masters, the next Major of the Rolex Grand Slam of Show Jumping, is being staged in ‘s-Hertogenbosch in the Netherlands from March 8th-11th, 2018.