The first finalists have qualified already! 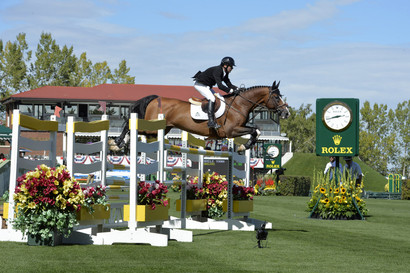 The Rolex Grand Slam of Show Jumping, that is the ultimate challenge of the show jumping sport: Winning the three big Majors – Geneva, Aachen and Spruce Meadows – in succession and thus rising to the peak of the sport. That is every top rider’s dream. And on Sunday, we will find out whether this dream will become reality for Scott Brash.
For the winner of the Majors in Geneva in 2014 and in Aachen in 2015, the Rolex Grand Slam is within reach! Just one victory is missing, he has to demonstrate one more time that he is exceptional, that he hasn’t be heading the world ranking list for months without good reason. On Sunday, in the big Final of the Spruce Meadows ‘Masters’, it is all down to Scott Brash: If he wins the Grand Prix, the “CP ‘International’, presented by Rolex”, he will go down in equestrian sport history as the first ever Grand Slam winner.
However, there is big competition from big names, who also have big goals. Because befittingly for a Major, only the very best riders in the world qualify for the Grand Prix and thus have the chance to take part in the Rolex Grand Slam of Show Jumping.
Scott Brash himself succeeded in securing his place in the Final after achieving a top ranking in the qualifier on Thursday. The same applied for the Belgian Vice European Champion, Gregory Wathelet, and for the Canadian Olympic gold medallist and two-time ‘Masters’ winner, Eric Lamaze, who were able to win the two qualifiers on Thursday. The US-American rider McLain Ward – the winner of the ‘Masters’ in 2009 – already demonstrated that he is in top form when he won the opening jumping competition on Wednesday: This would have also meant he had qualified for the Grand Prix – had he not already secured himself a place in the Final as the reigning Pan American Champion. On the other hand, Ward’s fellow countryman, Kent Farrington, still had to qualify: That was no problem for the current number five in the world rankings, because he notched up excellent placings in the competitions on Wednesday and Thursday. The two French riders Roger-Yves Bost and Kevin Staut also put in top performances: They are currently lying in first and second place in the interim rankings of the ‘Masters’ and have thus definitely already qualified for the Final.
We will also see three other former Spruce Meadows winners on Sunday: The two Belgian show-jumpers Pieter Devos, who won the Major in 2013, and Olivier Philippaerts, the winner in 2012, both succeeded in qualifying in the competitions on Wednesday and Thursday. Canada’s national hero, Ian Millar, qualified automatically as the “defending title holder”, together with the Swiss rider, Steve Guerdat, for his victory at the 2012 Olympic Games.
The final opportunity to qualify is in the “Nations Cup” on Saturday. After this competition, we will know exactly which 40 contestants are allowed to ride into the impressive “International Ring” to compete in the Grand Prix that is endowed with prize money totalling 1.5 million Canadian Dollars. But one thing is already certain: For Scott Brash it is going to be the ride of his life!