The first step in the direction of the Rolex Grand Prix 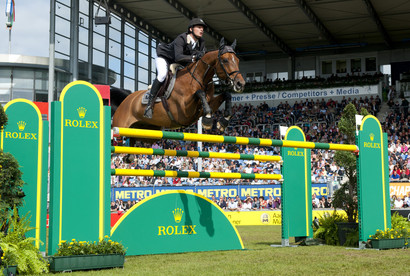 The Turkish Airlines-Prize of Europe at the CHIO Aachen 2014, which starts at 2.15 p.m. later today, is the first opportunity for the participating show-jumpers to qualify for the Rolex Grand Prix, Grand Prix of Aachen. A great deal of concentration is required to master the demanding course consisting of obstacles measuring up to 1.55 m. The jumping competition with one round and a jump-off is endowed with 76,000 Euros of prize-money and is one of the most traditional competitions at the World Equestrian Festival. It was staged for the first time in the year 1957. Back then, Hans Günter Winkler won the competition with his top horse Halla. Who is going follow in his footsteps more than 55 years later? There is a very high-class line-up of riders on the starter list.

The reigning Olympic gold medallist Steve Guerdat will be saddling his 13-year-old grey mare, "Nasa" for this competition. And the Belgian show-jumper, Pieter Devos, who like Guerdat, is also on course for success in the Rolex Grand Slam of Show Jumping, will be competing with his top horse "Dream of India Greenfield". However, he still has to qualify for the grand finale on Sunday, an obstacle that Guerdat doesn't have to overcome, because as the reigning Olympic gold medallist he automatically qualifies for the Rolex Grand Prix. However, Guerdat and Devos face strong competition, because the field of 54 competitors includes world-class show-jumpers and horses such as Pénélope Leprevost (FRA) with Nayana, Marcus Ehning (GER) with Cornado NRW, Ludger Beerbaum (GER) with Chaman, Ben Maher (GBR) with Wings Sublieme and Kevin Staut (FRA) with Oh D’eole.

Which show-jumpers ultimately qualify for the Rolex Grand Prix on Sunday afternoon and thus also have a chance of starting their own personal Rolex Grand Slam, won't be decided until Friday, July 18th. Since, in addition to the Turkish Airlines Prize of Europe, the floodlit Mercedes-Benz Nations' Cup on Thursday evening and the Prize of North Rhine-Westphalia on Friday are also qualifiers for the Grand Prix. A total point system then decides which 40 riders are able to compete in the Rolex Grand Prix, one of the most demanding jumping competitions in the world.