The path to the Major victory 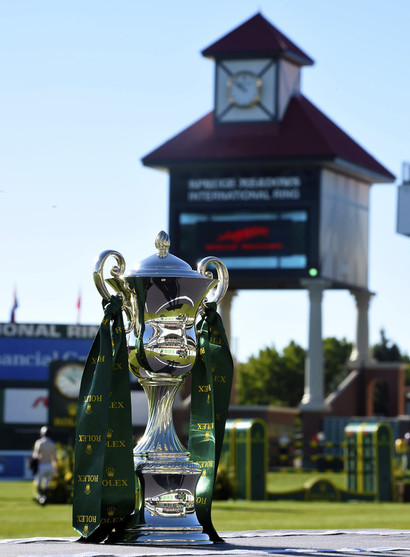 The Spruce Meadows ‘Masters’ begins today and the best horses and riders in the world have travelled to Calgary for the second leg in the year of the Rolex Grand Slam of Show Jumping, to battle it out for the victory in the Major. Five days of jumping sport in a class of its own is thus guaranteed, as well as a fitting final: The “CP ‘International’, presented by Rolex” on Sunday is endowed with an incredible two million Canadian Dollars in prize-money and challenges the elite of the jumping sport with one of the toughest five-star courses in the world.

Only 40 pairs have the chance to battle it out for the Major victory. In order to secure their ticket for the final they have to put in excellent performances in the qualifying classes that are being staged between today and Saturday. The last big rehearsal for the “CP ‘International’, presented by Rolex” and at the same time a highlight of the event is the Nations’ Cup on Saturday: Ten nations will be competing against each other and have sent their top riders to Canada for the competition: Eric Lamaze will be heading the team of the host nation. The Olympic gold medallist of 2008, already succeeded in claiming the victory at the Major in Spruce Meadows in 2007 and 2011 and recently proved that he is in superb form at the Olympic Games in Rio after winning the bronze medal in the individual classification.

The reigning Olympic gold medal-winning team, France, is sending two of its Rio gold medallists into the running: Kevin Staut and Roger-Yves Bost. And the USA will be represented at the Spruce Meadows ‘Masters’, first and foremost by their Olympic silver medallists, Kent Farrington and McLain Ward. Team Great Britain will be supported by Scott Brash, who became a living legend last year in Calgary after going down in history as the first rider to win the Rolex Grand Slam of Show Jumping.

The German delegation has got a first-class line-up too: Among others, the two Olympic bronze medallists and the reigning Vice European Champions, Meredith Michaels-Beerbaum and Christian Ahlmann (the current number one in the world rankings), as well as the winner of the CHIO Aachen 2016, Philipp Weishaupt, will be on the starters’ list. With his outstanding horse “LB Convall”, Weishaupt has got his sights set on the second Major victory in succession and thus also the next step in the direction of the Rolex Grand Slam. However, winning the “CP ‘International’, presented by Rolex” would definitely also prove worthwhile for Steve Guerdat from Switzerland: As the winner of the CHI Geneva in 2015, he has the opportunity to claim the “two-out-of-three” bonus for two non-consecutive Major victories within one Grand Slam cycle.

For Belgium, among others the reigning Vice European Champion, Gregory Wathelet, as well as Olivier Philippaerts, the winner of the Major in 2012, are also set to compete. The Netherlands, the reigning World and European Champions, are basing their team around Gerco Schröder, who can always be relied on to win a medal.

Regardless of how many excellent achievements all of these riders have notched up so far: In the legendary “International Ring” of Spruce Meadows, actions speak louder than titles. Each of the participants in the “CP ‘International’, presented by Rolex” has the chance to go down in history as a Major winner. However, only the rider, who puts in an absolute top performance on Sunday afternoon and displays total harmony with his horse and the resolute will to triumph, will be able to master this ultimate equestrian sport challenge.