The top stars of the sport in the Rolex Grand Prix 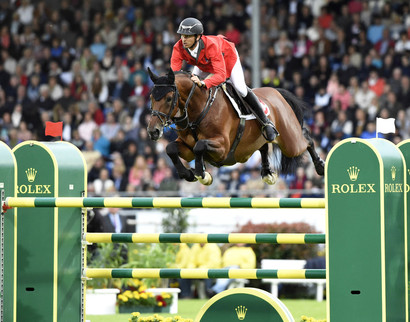 The contest for the crown of the equestrian sport is entering a new round with the CHIO Aachen 2016, the first Major in the year in the Rolex Grand Slam of Show Jumping, and now it has already been decided, which 40 athletes will be able to face the ultimate challenge in the “Rolex Grand Prix” on Sunday.

The best riders in the world had the opportunity to secure themselves a ticket for the grand final in three different classes: The Canadian Olympic gold medallist, succeeded in winning two of the qualifiers, the “Turkish Airlines Prize of Europe” on Wednesday and the “Prize of North Rhine-Westphalia” on Friday. As such, the crowd in Aachen can look forward to greeting him on Sunday together with Simon Delestre, who claimed first place in the first qualifier for the “Rolex Grand Prix” and who is also the current number one in the world ranking list, and the youngest Major winner of all time, Olivier Philippaerts: In 2012, the then 19-year-old rode to victory in the Spruce Meadows ‘Masters’. Thanks to his excellent performances in the qualifiers – among others ranking third in the “Turkish Airlines Prize of Europe” – the Belgium rider now has the chance to battle it out for a further triumph in the Rolex Grand Slam.

In the “Mercedes Benz-Nations’ Cup” on Thursday evening, the winning team from Germany sovereignly secured themselves a place on the starting list for Sunday: Ludger Beerbaum, Christian Ahlmann, Meredith Michaels-Beerbaum and Marcus Ehning have not only notched up a long list of Championship victories, each of them has already been able to win the Major in Aachen at least once. However, the US American and French riders, who brought a huge dose of excitement and nail-biting entertainment to the Main Stadium in Aachen on Thursday after engaging in a head-to-head race with Germany, are also among the favourites to win the “Rolex Grand Prix”. The top riders from the USA – Kent Farrington, McLain Ward, Beezie Madden, Laura Kraut and Lucy Davis as well as Pénélope Leprévost, Roger Yves Bost and Philippe Rozier – all three were members of the French team that won silver at the World Equestrian Games in 2014 – will undoubtedly also convince the crowd with top performances on Sunday.

Finally, the Rolex Grand Slam winner, Scott Brash from Great Britain; the Dutch multi-champions Gerco Schröder and Maikel van der Vleuten, as well as the Olympic gold medallist, Steve Guerdat will be among the prestigious line-up. And although a dream would come true for every rider if they succeed in claiming the victory in the “Rolex Grand Prix” – for Switzerland’s superstar much more is at stake: As winner of the CHI Geneva in 2015, Steve Guerdat could make his second Major victory in succession come true and would thus travel to Calgary in September as a hot candidate to take the Grand Slam title and win a bonus of one million Euros. “Corbinian is an incredibly talented horse with amazing potential,” said Steve Guerdat about the gelding, with whom he won the World Cup Final in April and who is his chosen horse for the “Rolex Grand Prix” on Sunday. “It is his first time in Aachen and we will have to wait and see how well he copes with the impressive atmosphere on Sunday. But he has already proven that nothing is too difficult for him!”