Word from the Organiser: Frank Kemperman 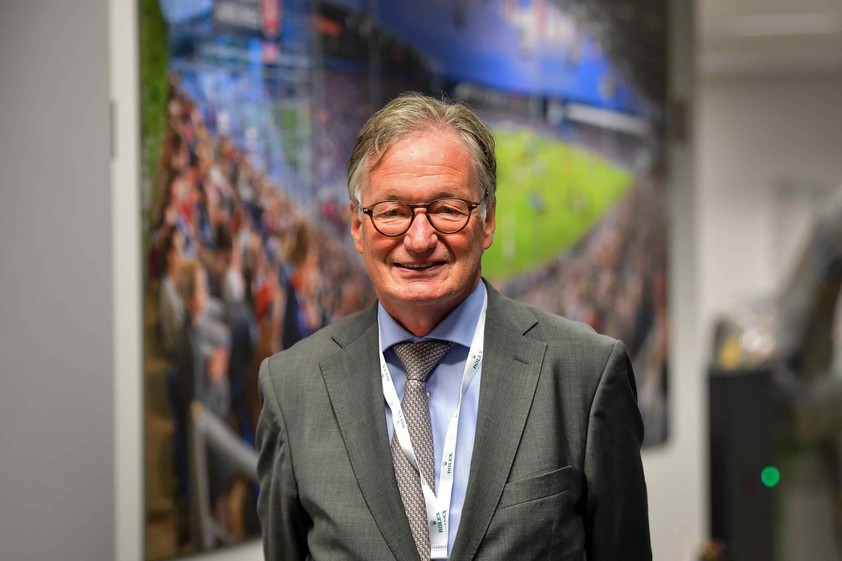 CHIO Aachen Chairman, Frank Kemperman, is set to retire following an incredible 29 years of service to the show. The Rolex Grand Slam team interviewed him to find out how the show has evolved and what he will miss most.

You have had 29 incredible years with CHIO Aachen, what have been the three main highlights for you?

My highlight has to be the FEI World Equestrian Games in 2006 – I had been involved in other championships before, but nothing will compare to those held at CHIO Aachen. It was a lot of hard work for our team, and I think I got my first grey hairs, but it was such a success. Even now people still talk about those Games, and I think we wrote an important part of history with them. It is difficult for me to choose two other highlights as we have had so many incredible shows and classes!

How has your career evolved throughout the years?

CHIO Aachen is steeped in history. In 2024 it will celebrate its 100-year anniversary and the club will be almost 125-years-old. I used to go the show as a child and there was always something magic about it – in my opinion it is the best show in the world. It is so important to keep the traditions that we have at the show, but also crucial that we continue to innovate and change with the world. Quality is also key, as a show we strive for the best of everything, and that combined with the traditions and innovation makes CHIO Aachen the best in the world!

When I started, I was doing shows all around the world, and then CHIO Aachen approached. Initially I thought it was a bit strange that the German’s were asking a Dutchman, but I was already heavily involved in the media centre at the show. I think they wanted to become more professional and modern. Together with the show I have helped to make the facilities better and lots of things have been changed and modernised, whilst ensuring the traditions and history of the show remain.

The show is now looking towards the future by trying to innovate and I think that that is something every show or event should try to do. I remember when I first started working at CHIO Aachen there were five or six people in the office, and now today there are around 35 people. Back then we did not have a single in-house professional for media, just had a lady from the local newspaper who would come by once a month to see if we had any news to share – now we have a specific media department with 10 people.

At the 2006 FEI World Equestrian Games we had the use of the internet, but social media was not in existence. The world has changed so much, and we always tried to follow and adapt to these changes – for example social media is now a huge part of the show. I remember when I first came to the office, we had one electric typewriter and there were no computers. Today, people would not cope without the use of computers. I think this shows how much things have changed over the time that I have been Chairman. But, what is amazing about CHIO Aachen is how we always look towards the future and innovate.

What will you miss the most?

Of course, I will miss CHIO Aachen, but I am going to be part of the Supervisory Board, so I will still be involved. I think the change in routine will be difficult – every morning for the last 29-years I have gotten out of bed and gone to the office, but I do think that Covid-19 has made that transition easier. I think it is time for the next generation to take over. I am getting older, and so it is normal to let younger people take on the role. It was Father’s Day in Holland on Sunday [Sunday 12 June], and I got a very funny book about retiring. CHIO Aachen was here before I was the Chairman and it will be after – my name is not what is important, the most important thing is the show and the success of it going into the future.

What do you plan to do with your spare time?

I am still involved in The Dutch Masters and Maastricht in the Netherlands, and I am part of the Dutch Equestrian Olympic Committee as will as the Chairman of Grooms. Grooms are the most important people in the sport.

My wife is trying to make me become a gardener – but I really do not know the difference between weeds and flowers. But my most important job now is being a grandfather. I have a two-year-old granddaughter who lives in the same village as me, and I love spending time with her.

Who has been the most influential person you have worked with over the years?

I think the horses have been the most influential – we work in such a unique sport. We have to listen to the horses and understand what is best for them. The outside world is now more critical of our sport so we must ensure that the welfare of the horses is our top priority. We have to make sure that we can continue to do the sport we all love so much.

To name just one person is hard – but to be honest I think the most influential person would have to be my wife because without support from home you cannot do the job.

What does it take for an event to become a Major?

There are so many amazing horse shows organised around the world and of course you always want to be the best show in the sport. It is challenging to get people who are not horse lovers interested in the sport. The special thing about CHIO Aachen is the spectators and the number of them that come – they create the most amazing atmosphere. At many other shows, even if there are the top riders jumping the atmosphere is not the same – it is what makes CHIO Aachen so unique. We have two different types of people that come to the show. Firstly,  the horse lovers who go to shows every week and secondly  the fans who don’t have horses but come every year because they love the atmosphere and like to watch sport.

You don’t have to be a horse lover to have a fantastic day at CHIO Aachen. There are thousands of people who love the event, and they shop, have food and drink. It is the total atmosphere that makes CHIO Aachen great, and that is what we have to offer. We don’t just listen to what the horse people want and need. You must also have good relationships with the riders as well and understand what they need.

I have visited many shows, I think I have seen almost everything, but to be honest the events where I learnt the most are not equestrian ones.  We went to Roland-Garros, The Championships, Wimbledon and other big events to learn what they were doing and how they make their events unforgettable for spectators. In our sport, we must cater for a range of ages, as unlike football where 80% of the crowd would be male, the majority of ours is families, so we have to ensure that everyone is happy.

Everything around the sport should be spectacular to make it an unforgettable day and I think that helps make a show a ‘Major’. CHIO Aachen is one the best equestrian events in the world, but our goal is to be on the front page of every newspaper in the world and show that we are not only a horse event.

Which horse and rider combination has been your favourite to watch compete at CHIO Aachen?

There have been so many! Of course, there are some riders that you know more in your private life, and it is always nice to watch them be successful. Last year, it was incredible to watch the young American team win the Nations Cup™ - they were so happy to win such a big event. It was a fantastic moment in the sport, and so great to watch the next generation of show jumpers loving the sport. It is also amazing to watch Isabell Werth be so dominant in the dressage; and of course, an amazing moment was watching the father and son combination of Rodrigo and Nelson Pessoa come first and third in the Rolex Grand Prix in 1994. Moments like those are unbelievable, and hopefully in the future I will have more time to watch them!

How do you think the Show can evolve over the next 10 years?

CHIO Aachen is so special – it provides the best sport in the world and has the incredible grass arena. They have some traditions that I think they should not change, but they should also try to innovate and look at what can be done better. The show is all about ensuring high quality, and making sure that the welfare of the horses, the spectators experience and the media response are the best that they can be. It is like making a cake; you need all of the right ingredients to make it delicious and in CHIO Aachen’s case that includes sponsors, riders, media, horses and so on. The show needs to try and make sure that all of the key stakeholders are happy to have the best show possible. So many things have changed over the last 30-years, but the quality is still there, for example with the Rolex Grand Prix on the final Sunday. Overall, I think if they keep the traditions of the sport but also look to innovate then CHIO Aachen will continue to be the best in the world.